The Local Government of Marikina headed by Mayor Marcy Teodoro acknowledges the tireless efforts done by volunteer street cleaners to ensure that the city is clean and green.

“Marikina is known for what? We are known for our cleanliness and that is because of our street cleaning volunteers that work tirelessly,” said Mayor Marcy.

This is the reason why he hired 206 volunteers street cleaners as project-based employees under the City Environmental Management Office (CEMO) in Marikina. 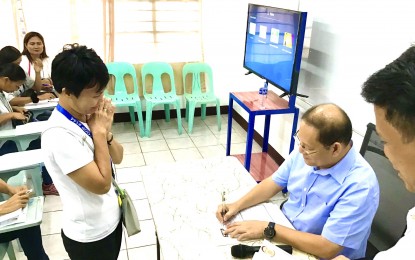 Mayor Marcy met with some of the volunteer street cleaners on Wednesday, October 9 to sign their contracts as new employees of CEMO who will be tasked to ensure and maintain the cleanliness of the city.

“We really worked it out to allocate budget for their employment so that they can earn money, and not only receive an allowance,” said Mayor Marcy.

Mayor Marcy ensures that there is an appropriate budget allocated to the volunteers so that they will be able to earn more aside from their allowance.

Most of the volunteers have been providing public service since 2005. They render four hours of volunteer work with P150 daily allowance or P4,000 allowance take home every month.

With the initiative of Mayor Marcy, volunteers will now have a regular eight-hour duty making them qualified to receive a minimum wage.

This is also Mayor Marcy’s way to give these volunteers a chance to make a decent living. On top of that, these volunteers will undergo a skill test to assess their performance prior to their employment and will be required to attend financial literacy seminars to help them to effectively manage their finances.

Mayor Marcy is thankful to these volunteers who he said are heroes of the city who does more than sweeping the streets in Marikina but also remove unwanted posted bills and other eyesores.

Marikina City has been known all over the Philippines to be a clean city, thanks to these volunteer street cleaners.