Marikina Grabs ‘Seal of Excellence in Governance’ Award from DILG

The City Government of Marikina headed by Mayor Marcy Teodoro was given the Seal of Excellence in Governance award from the Department of Interior and Local Government (DILG) for successfully keeping the City in order and meeting the obstruction-free status of roads and sidewalks as mandated by the National Government.

DILG Secretary Eduardo Año personally handed the award to Mayor Marcy during the grand launching of the “Disiplina Muna” campaign and the Safe Philippines Project at the Marikina Hotel and Convention Center last Friday, November 22. 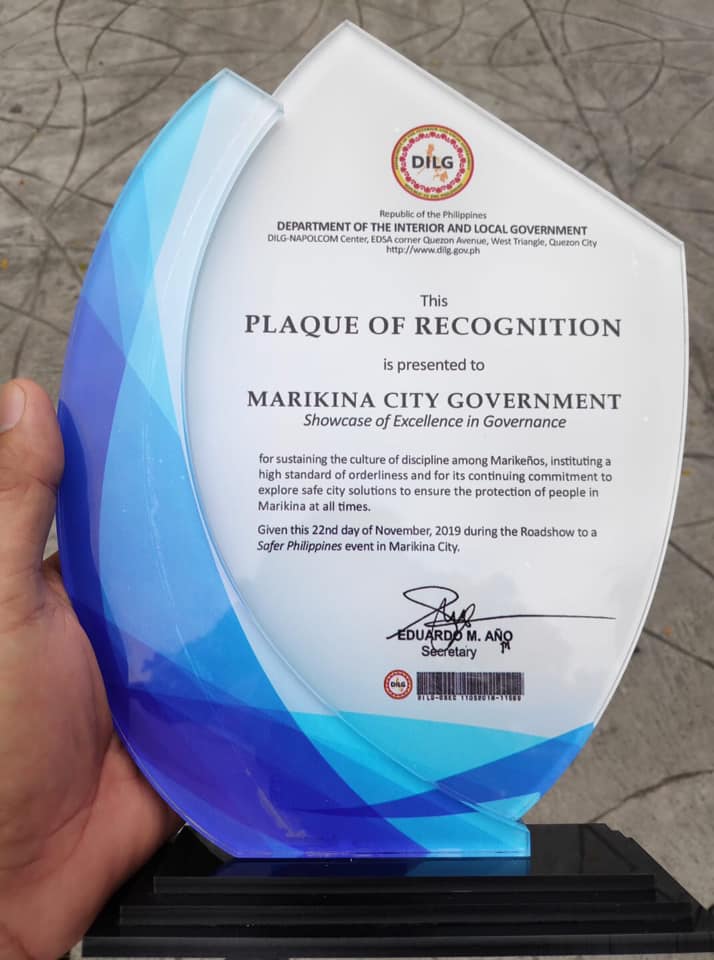 Along with this, Marikina also received commendations from Sec. Año for being a model city in terms of cleanliness and its culture of discipline. He even asked Mayor Marcy’s permission if DILG can copy Marikina’s best practices to share it with other cities to emulate.

“I witnessed the evolution of Marikina during 1960s, 1970s until now. As you can see the city of Marikina we call it model city in our country. Sa katunayan dito mismo sa Marikina, masaya akong ibahagi na nangunguna kayo sa pagtataguyod ng maayos at maluwag na lansangan,” said Sec. Año.

Marikina City has been known for having a culture of discipline, strict enforcement of ordinances and its numerous road-clearing operations. This made Marikina a model to other cities and municipalities.

Mayor Marcy made sure that the Local Government of Marikina creates different measures to implement and sustain an obstruction-free city. Among these was the “No Garage, No Building Permit Ordinance of 2019” which requires business owners to provide proof-of-parking space before they could obtain a business permit.

Mayor Marcy also ordered the removal of gates of subdivisions to give motorists alternate routes and ease the traffic situation in the city.

“This is our contribution to national development that we can boldly and proudly say that Marikina’s main roads and thoroughfares are hassle-and hazard-free. The most challenging part, however, is sustaining the sidewalks and roads, making sure that they are always clean and walkable,” Mayor Marcy said in his speech.

He believes that consistency and fair implementation of city ordinances is the key and must always be observed for everyone’s benefit. Meanwhile, reclaiming roads and sidewalks being used for personal gain of some residents was an appropriate move as these are public domain.

The commendable and consistent efforts of Marikina made it one of the ambassadors of the “Disiplina Muna” campaign of the DILG.

The “Disiplina Muna” campaign aims to revive and uplift the culture of discipline and to put into practice the real concept of governance where citizens are encouraged to help achieve national growth.

DILG Undersecretary and spokesperson Jonathan Malaya even said that the national campaign aspires to achieve what Marikina has been doing in its city.

Marikina was the first city in Metro Manila to comply with the DILG’s directive to clear all public roads from obstruction ahead of its 60-day deadline. The City Government of Marikina also received the highest score of “high compliance” for its road clearing operations and for maintaining obstruction-free roads and sidewalks.

Mayor Marcy is committed to continue providing excellent public service to Marikeños and fostering the culture of discipline in the city.